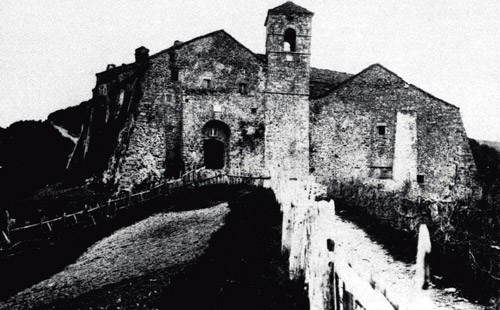 The oldest document still in existence relating to San Pellegrino dates back to 6 August 1110, when the notary Ugizio di Castiglione di Garfagnana drew up a deed giving some of his possessions to the church of San Pellegrino, and the house attached to it used as a refuge.

Why was a refuge built at a height of 1525 metres near an Apennine pass? A very long time ago, as far back as the Lombard era, there was already a road linking the Serchio valley to Emilia-Romagna via the San Pellegrino pass. It was subsequently named the Via Bibulca and in the 11th century increased in importance following the foundation on the Emilia side of the Abbey of Frassinoro (1071) by Beatrice, mother of Countess Matilda of Canossa. Under Matilda’s governorship, other routes across the Apennines were improved and churches and facilities offering hospitality were built (Ospedaletto di Sillano and Ospitaletto in Emilia-Romagna, San Bartolomeo del Saltello, Ospedaletto in Val Fegana and San Geminiano near the San Pellegrino pass).

The road that crossed the mountains at the San Pellegrino pass was the most frequented by travellers of the time whose journeys were motivated not only by commercial interests, although significant, but also by a phenomenon characteristic of faith in the Middle Ages, pilgrimage.

The length of their journeys, almost always made on foot and for many reasons, meant that pilgrims and travellers often found themselves in difficulties and in need of help. As a result, refuges providing assistance flourished. A community of men and women who provided assistance to travellers became established at San Pellegrino at the beginning of the 12th century. Members of the community called each other “brothers” and wore a habit embroidered with a symbol composed of items carried by pilgrims: the "staff", a long "T-shaped" stick, and the "pouch", a travelling bag. In order to offer hospitality, the community supported itself by working, keeping sheep and collecting alms across most of Tuscany and the Po valley. A church, somewhat smaller than the current one, and a hospital were built to serve the needs of the community prior to 1110. The two buildings were accessed through doors at either end of an archway which covered a short section of the road and provided shelter from the ice and snow. This was undoubtedly an advanced architectural solution for the time, enabling access to the hospital and shrine under the best possible conditions at a time when temperatures were more severe than they are today.