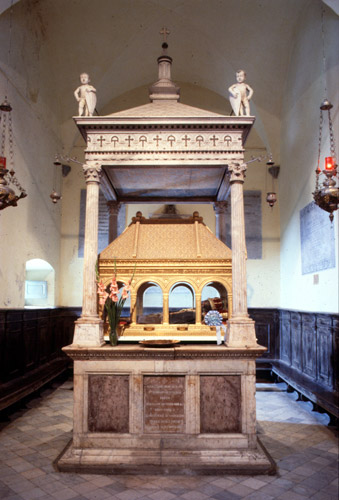 The shrine and village of San Pellegrino in Alpe

The church and hospital complex in San Pellegrino in Alpe is mentioned for the first time in document dating from 1110. So from the outset, it served the dual functions of a shrine, where the relics of the Saint were kept, and a place of hospitality for those travelling the Via Bibulca as pilgrims on the way to Rome or the Holy Land or for any other reason.

The two functions were equally important at least through to the end of the 14th century; the road was used by pilgrims and travellers and devotion to the Saint, promoted by the community’s lay brothers who ran the complex, brought the faithful from both sides of the Apennines.

Subsequently use of the road declined and, in order to make up for the reduced income, the family from Lucca in charge of the complex enlarged and enhanced the architecture of the church in order to encourage worship of the Saint. It was no accident that Lucca’s most successful sculptor of the day, Matteo Civitali, was chosen to create the new altar to display the bodies of San Pellegrino and San Bianco.

DFrom then, its function as a shrine increased in importance attracting the faithful from all social classes, who followed established routes, even covering considerable distances, to celebrate the associated penitential rites in situ. Management of the shrine required the construction of facilities, temporary at first and then permanent, and during the 18th century even the inns still there today. At the same time, the other churches with hospitals high in the mountains which served the trans-Apennine routes were abandoned and the exact location of some of them is not even known (San Bartolomeo del Saltello and Ospedaletto in Val Fegana). The permanence of the complex and the development of the hamlet, forever inextricably linked to the provision of hospitality, were thus due to the worship of San Pellegrino and San Bianco, neither ever officially recognised by the Catholic Church, but deeply rooted in popular devotion, which developed a legend around them, spread by the community’s lay brothers who collected alms for the poor.

The legend of San Pellegrino

According to the legend, San Pellegrino was the son of the king of Scotland Romano and his wife Plantula. He performed miracles from the day he was baptised. After a childhood of penitence, he renounced succession to the throne and headed for the Holy Land, accompanied by a band of robbers whom he had miraculously converted. After suffering persecution, he sailed to Italy where he visited the principal shrines. He lived in a cave where he was visited by wild animals which he befriended. After many years, he took refuge in a hollow tree, an appropriate place for penitence. Of particular significance is the story that, resisting temptation, Pellegrino angered the devil who hit him with such force that the Saint spun round three times. The incident is said to have occurred near the Apennine ridge in the place where penitents processed carrying a stone in expiation for their sins, stones which can still be seen at the so-called Devil’s Circle, near a small mountain chapel. San Pellegrino died at the age of 97, after writing the story of his life on the bark of a tree. A husband and wife from Modena, guided by an angel in a dream, found his body intact, guarded by many animals. The bishops and inhabitants of Tuscany and Emilia-Romagna rushed to the scene and an argument broke out between those from Emilia who wanted to take the Saint down to the plain and the Tuscans who claimed him, as he had died on their land. The corpse was placed on a bier pulled by two wild bullocks, one from Tuscany and one from Emilia, which stopped at a place known as Termen Salon. A church was built there in honour of San Pellegrino and dedicated on 10 August 643. The site, where various miracles occurred, was honoured by popes and emperors and a refuge was then built to accommodate those who came to worship the Saint.

The legend has many historical inconsistencies and similarities with other better known stories, such as that of Lucca’s Holy Face, the destination of which is said to have been decided by the same method of a cart drawn by wild oxen, it remains significant that a name was attached to a body, Pellegrino, and a story developed, the salient features of which all relate to pilgrimage. The renunciation of power, penitence, pilgrimage to the Holy Land, the visit to Italian shrines, the isolation of the hermitage resulting in the close relationship with nature and the wild animals identify a holy person especially suited to protect and assist those who, like him, were going to undertake a long journey to visit holy places as pilgrims or simply those who, for a variety of reasons, were following a difficult route such as the Via Bibulca which crossed the Apennines using a pass more than 1,600 metres above sea level. Subsequently, although the aspect of pilgrimage to the shrine remained an essential element for the faithful, the penitential aspect associated with it grew in importance and thus the carrying from the shrine to the Devil’s Circle of a stone in proportion to the weight of the sins which the penitent wished to expiate.